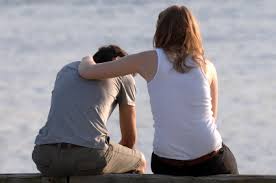 A 38 year old woman from Kamothe,Panvel,came to me with Ultrasound report showing a malformed fetus of 16 weeks duration.

She already had a 11 years old son by Caesarean section.

She delayed her second child bearing to gain financial stability.

The incident was unfortunate one,but she had to be posted for second trimester termination which is like a mini labour.

Expulsion of fetus was uneventful.

Later a DNC was also performed to clean out remaining bits of placenta.

In such cases the major challenge that a Gynaecologist faces is that of retained products of placenta.

See, despite the fact that the fetus is abnormal, the placenta holds on.

It is not yet ready to be detached.

As the plane of separation is yet not formed.

Even though the Gynaecologist will use instrument to do curettage,still some bits & pieces may remain.

They may give rise to irregular bleeding later on.

This may require DNC again.

The procedure then needs to be carried out under Ultrasound guidance.

These are some pointers to remember

Posted by Dr Himani Gupta,Gynecologist,Kharghar,Navi Mumbai at 23:26 No comments: 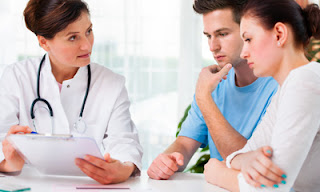 Before answering this question first let us look at the mechanism of working of abortion tablets.

In the protocol of abortion tablets-there are two drugs involved.

1) Mifepristone- this is an Anti progesterone drug.

Progesterone is the hormone responsible for continuation of pregnancy.

When Mifepristone tablet is given, it acts as anti-pregnancy at the level of placenta.

This is the first tablet of the schedule that is given.

Next 48 hours are allowed for it to take effect.

2) Misoprostol- this is a uterotonic agent.

It causes contraction of the uterus.

As Mifepristone has already done it's job of loosening of grip of pregnancy on uterus,Misoprostol now will cause expulsion of products of conception.

The most important factor for success of abortion tablets is Gestational Age- that means the duration of pregnancy.

It is in the best interest of safety of the pregnant woman,that determination of gestation age is done by sonography.

There is a limit of gestation age till which abortion tablets can be given safely.This rule must be followed.

Another level of safety is giving Tetanus injection( vaccine).It will protect the woman undergoing abortion from getting this infection.

Last but not the least-third level of protection is antibiotics coverage.

Now once all these precautions have been observed, we will talk about the benefits of early abortion by tablets.

1) It is non-invasive-means-this is not a surgical procedure & no instrument is put inside uterus. Hence no chances of surgical complications .

2) It is OPD procedure-hence no need for expensive hospital admission.

3) Safety index is high as explained in above discussion.

4) Success rate of procedure is high is all the protocols are followed.

Now,in general return of fertility for the woman is as early as next menstrual cycle.

She is advised to use one of the regular methods of contraception to avoid further incidences of unwanted pregnancy.

At times ,once couple has undergone medical abortion, they usually give a gap of few months to couple of years before they decide that they want to become parents.

Abortions tablets per se do not cause any infertility or delay in conceiving next time.

But with passage of time there can be other factors which now affect the health of the woman.

Majorly hormone disturbances could have set in.

Also some infections also cause damage to lining of uterus -that is endometrium or blockage of Fallopian tubes.

These above factors are independent of Abortion Tablets.

Which woman will get which factor,that will prevent her from getting pregnant next time,also is unpredictable.

Abortion tablets per se does not harm future fertility potential per se.

Every pregnancy should be a planned pregnancy.

Use regular method of birth control.

Posted by Dr Himani Gupta,Gynecologist,Kharghar,Navi Mumbai at 09:42 No comments: 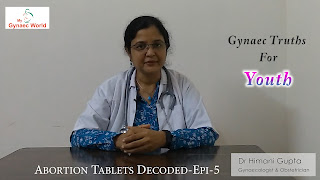 When a young couple wants to take abortion tablets, whether the couple is married or unmarried, they seek answer to many general questions ? How much will be the bleeding ? What to eat ? What about intercourse during bleeding period ? Till up to how many weeks it is safe to take abortion tablets And some more.. Watch this video to get your answers.

Posted by Dr Himani Gupta,Gynecologist,Kharghar,Navi Mumbai at 23:28 No comments:

Pain quotient during abortion by tablets 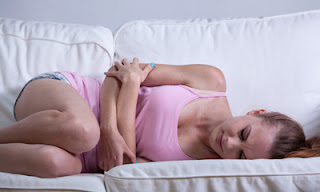 A 32 year old resident of Kamothe, Kharghar, took abortion tablets from us.

She was amply counselled for process, the amount of pain that she will have to endure and time that it takes.

Still, when the process started, she could not bear the pain.

However mild analgesics were prescribed for her.

What women need to understand is that , this is how abortion tablet will work.

It will cause contraction of uterus and throw out the products of conception.

Posted by Dr Himani Gupta,Gynecologist,Kharghar,Navi Mumbai at 23:07 No comments: 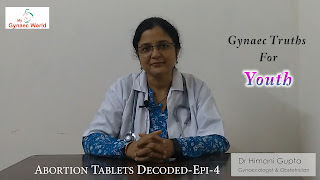 -Is it not better that young couples whether married or unmarried stay protected by using oral contraceptive pills as a method of protection from unwanted/accidental pregnancy ? -There are so many tangible benefits attached to using regular birth control pills. -Dr Himani Gupta will discuss this point in this video. -She will also bust many myths surrounding use of birth control pills.

Posted by Dr Himani Gupta,Gynecologist,Kharghar,Navi Mumbai at 23:14 No comments:

It is a rare anomaly.

In this case, the reason might have been very well,COVID infection at early gestation age, which resulted in malformation of fetus.

This anomaly got detected at 12-13 weeks ultrasound

The couple got devastated.

Termination of pregnancy after counseling was advised

Posted by Dr Himani Gupta,Gynecologist,Kharghar,Navi Mumbai at 07:06 No comments: 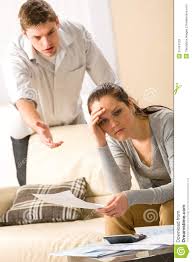 The other day we encountered a curious case.

On ultrasound the duration of pregnancy was of two months.

On history taking, it got revealed that wife was at her parents place and only came back a month ago.

Gynaecologist was at loss of words.

Marital dispute was on it's way, that much was apparent

Posted by Dr Himani Gupta,Gynecologist,Kharghar,Navi Mumbai at 06:52 No comments: